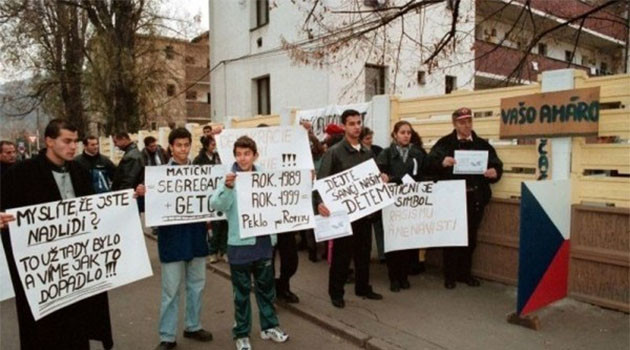 Twenty years ago, on 13 October 1999, a concrete wall was installed on Matiční Street in the city of Ústí nad Labem. The barrier became an infamous example of problematic coexistence between neighbors in the Czech Republic.

The wall was meant to separate an area of single-family homes that were privately owned by non-Romani people from municipally-owned apartment buildings that were predominantly occupied by Romani people. Under pressure from the Czech Government, and after protests by human rights defenders both abroad and domestically, the barrier was disassembled six weeks later.

The Romani tenants had moved into the municipally-owned units on Matiční Street after moving away from other housing estates in the area in 1994. Their neighbors living in the single-family homes said coexistence with the newcomers was problematic and wrote up a petition demanding the building of a wall so they would not have to hear or see what they complained of as disorder and noise around the municipally-owned buildings.

We have 495 visitors watching ROMATIMES.NEWS