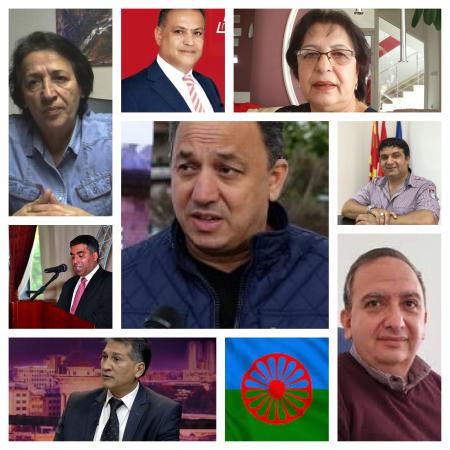 Do divisions and giving credits for some accomplishments to an individual or a group of people bring us progress? Does arguing, making setbacks and “working behind one’s back” bring prosperity?

Will the distrust, intrigue and accusations, etc. be beneficial to our community or bring progress? We all know that the answer is a clear “No”. And now, a question is posed, everybody knows the answer, why are we continuing this cycle? How do we break this chain? Quite simple actually! If we, from the Roma community declare that we are fighting for the benefit of the Roma, and if we leave behind our vanities, ego, and internal antagonism, and if we make minimal efforts to join forces. No matter who’s in front or a little back in the line, what is important is to have a common goal – UNITY! We know that the era of “Divide, then conquer” is passed! The results of such ruling and behavior are more than visible.

I as a person who has been a Roma activist for many years and also as the Coordinator of the Network for Systemic and Permanent Solutions which is composed from the majority of the Roma NGO Sector would like to clear out some things. These past few days, a news report was presented regarding the situation of the people without personal documents in this country. We’ve heard many view and opinions such as “who is the most deserving” that these people obtained their documents. And everyone took credit for themselves, and not the real people who “wandered” on the field to identify these individuals and did many activities in order to realize their right from which they have been deprived for many years.

In favor of the truth, the heaviest load from this activity was carried out by the organizations which are a part of the “Network for Systemic and Permanent Solutions”, however, the Network did its job humbly and zealously, without major attention and exposure. “This is best known by the people who were written down and registered, and who now have their documents. But, nevertheless…the Network will continue to act and work without any major exposure and self-advertising.

However, it must be known that the credits for any activity should be shared, no pre-formulations or anything. Also, I would like to point out that it is time to see each other face to face and to openly say who can do what for the overall benefit of our people. We must sit down and have a joint consultation. To have a joint goal which defines that dispute, hostility, setbacks “working behind someone’s back” do not bring us any good.

The problems in this society are enormous, and yet, we deal with minor things. We need to have a mutual understanding and respect, because that is the only thing that will wake up our consciousness.

The local elections are near, there is a chance of Parliamentary elections, a citizen census and many other activities. Any schism is fatal for all of us. Let's shake our brains a little so that it is not too late. We already are late, but there is a redo for everything.

Enough with divisions, let’s do it together! 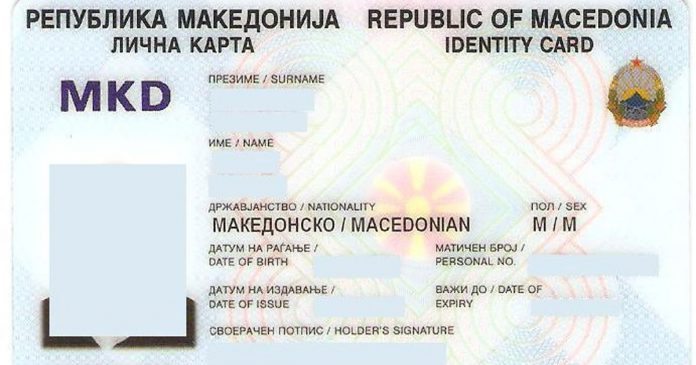 There are different views in the country from the political entities whether the ethnicity should be in the new ID cards or not. For some it is necessary, for others, there is no such thing in international practice.

But one thing is certain, there is no democratic country in the world in which there is an ethnic or religious affiliation. And despite the arguments that they will care for all ethnic communities in the country, to me this explanation seems insufficient.

Having in mind that our political system and law affirms the ethnic division and inequality of all citizens on ethnic basis, this ethnic labeling will only increase the inequality within the society.

The ethnic borders aren’t as rigorous as before, there are people with double, triple and more ethnic identities, as a consequence of the mixed marriages, migrants and the other processes of modern life.

The document itself, such as the ID card, is not a private one at first, but a public document, which is temporarily given to the person so that the institutions and the public and private legal entities determined by law can identify it.

The data from the ID card, especially the personal identification number, are also protected by law. Ethnic identity is a private and subjective category. No identity today (and in the past) is immutable, including ethnic. Man can choose and change any identity whenever he wants.

This will introduce ethnic profiling at a small door in Macedonia. Without the declared and inscribed appropriate ethnicity in the ID cards, the citizen will not be able to be employed under equal conditions, he will not be able to enter certain commercial institutions such as discos, swimming pools.

It proves once again that we are the only country and society in the world that the Preamble of the Constitution serves as a basis for discrimination!

And we declare ourselves and belong to the western civilization and our country is a full member of NATO!And to top it all off, we got to hear the opinion of the EU who are against such laws! 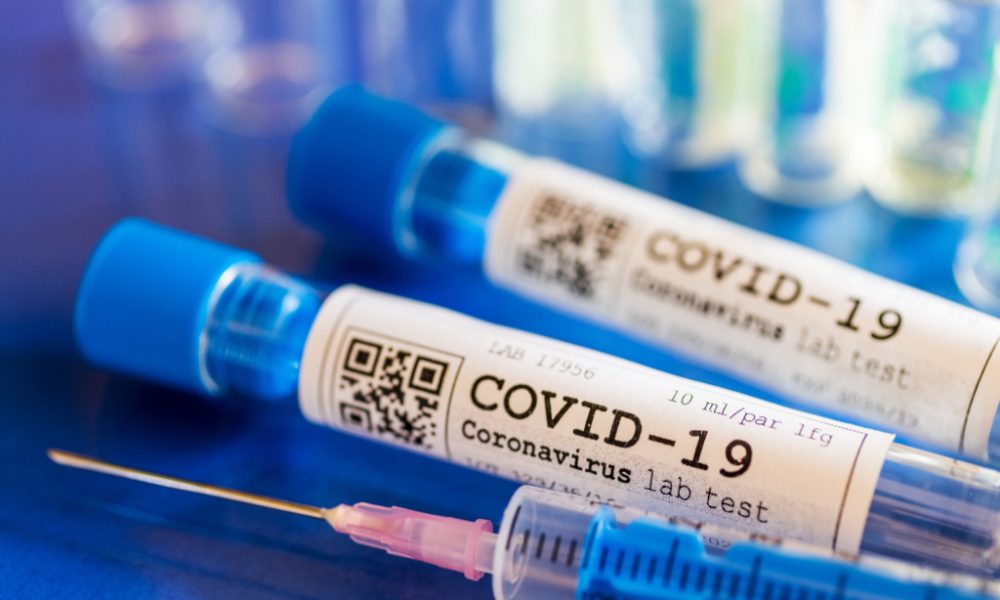 After the explosion of the Covid 19 pandemic all over the globe, besides the battles to prevent the virus, one of the priorities to find the vaccine. At the end of 2020, the vaccine was found, and the preparation and distribution, as well as the plans for its realization. However not everything goes as planned. Even the WHO mentioned that even the most developed countries aren’t fully prepared for the realization.

This crisis reveals a collective weakness and an unequal access to the vaccine. Because many countries are suffering economically due to the pandemic, there is a higher chance that firstly only the economically stable countries will have access to the vaccine. And this simply, as proven in the past and the deeply rooted prejudices, this is predicted to happen to the Roma population in the countries.

The EU agency for Basic Rights (FRA) researched this situation in great detail in 15 countries members of the EU, focusing on the education: employment; poverty; healthcare; housing; and anti-gypsysm. He also highlighted the efforts of the civil society in order to solve the different challenges which are carried by the COVID - 19 pandemic. In the meantime the limited access to water, electricity and sanitary conditions are creating serious health issues – devastated by the various barriers to access of health services. The lack of basic infrastructure is a problem for all of the communities. This gives birth to the opinion that the Roma in this period will be among the last on the list for vaccination. In the meantime, the Roma community is “not convinced” that there will be equal access to the vaccine. That is why the opinion regarding the vaccine and its use is divided among the Roma community. This is implemented in the findings of some conducted analysis, tests and field research.

This division is almost equal everywhere where there are Roma, no matter if they are in the more developed or less developed countries within Europe.  This includes the Roma from the Eastern European block (Romania, Bulgaria, Moldova, Ukraine and the Russian Federation). This trend is also visible among the Roma from the Western Balkan (Albania, North Macedonia, Kosovo, Serbia, Bosnia and Herzegovina, Montenegro), as well as the Roma who live in Western and Central Europe, and even those in the north.

This has been pointed out in the conducted analysis from the Crisis Office of the IRU, which is already sent to the European Institutions and high representatives of the European Policies.  The reason behind this skepticism within the Roma community regarding the immunization and the trust of the vaccines is based on the fact that during the COVID – 19 pandemic, there was a devastating escalation of populist and racist voices in many European countries with the intention to blame the Roma community who live marginalized communities for this pandemic. Some of these measures were led by racist narratives which presented the Roma as a collective threat to the public health and safety and made measures for quarantining only the Roma communities.  This indicates the opinion that, when the vaccination process begins, they will start the other way around. This means that most of the countries where the ghetto and the Roma settlements were blamed for spreading the disease, won’t be on the priority list for immunization, instead, they will be at the bottom of the list.

To prevent the spread of the virus. In all communities, government efforts should be focused on raising awareness of human rights principles that protect the most vulnerable, both in the short term and beyond. Serious and vigorous confrontation with structural, racial and social inequalities that continue to expose Roma to greater health risks is needed.

That is why my fellow Roma, be prepared for such scenarios! 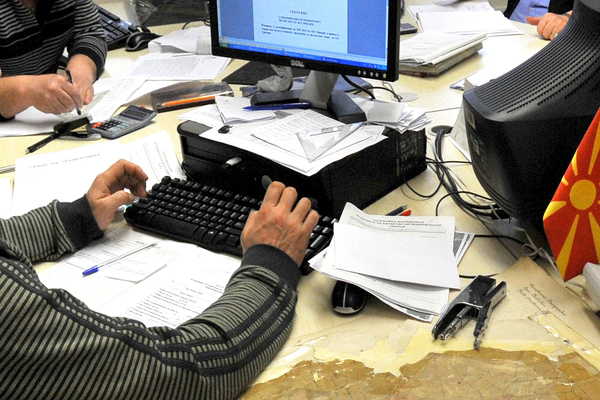 In our country after 2001 and with the implementation of the Ohrid Agreement, as one of the political solutions to stop the conflict in the country, the then leaders signed a series of constitutional changes, including a practice, employment in public administration with equal percentage representation of smaller ethnic communities.

Among them was the Roma community. With the last census of 2002, the percentage of Roma is 2.66% of the total population. According to those parameters, the representation of the Roma community in the public administration needs to be at that level. But in reality what is happening?

The Ministry of Information Society and Administration, in accordance with the legal obligation, published the Report on Public Employees for 2019.

The question now is whether the Roma political bloc in the distribution of jobs in the Public Administration knew "to bargain or not", the figures themselves show.

In some of the Public Administration institutions the number of Roma employees can be said to be on a symbolic level.

A typical example is the column with employees in the Ministries. According to the Ombudsman's Report, the number of employees there is 24,146, of which Roma have only 202 or 0.8%, of which only one Roma has been appointed as a manager. The situation is similar in the independent state institutions (agencies, directorates, commissions, institutes) out of 18,958 employed Roma are 151 or 0.8%. Employment of Roma in penitentiary institutions is devastating, where out of a total of 743 employees there are only 3 Roma or 0.4%. A flagrant example are the Courts of Appeal with 307 employees and the Higher Public Prosecutor's Offices with 75 employees there Roma - no!

The situation is similar in other public institutions of the Public Administration.

From all this it can be concluded that the political capacity of the Roma political bloc is minimal and they have no influence at all. Therefore, the question arises whether the Roma NGO sector needs to "press" or "breathe in the neck" of the political factors in the country.

And the question also arises in addition to employment on a part-time basis. whether those employments in the public administration are with appropriate education and job qualifications appropriate for the job. But this applies to all nationalities, not just the Roma community.

Otherwise, in the end it must be concluded that according to the percentage representation at the moment Roma need to be employed in the Public Administration around 2,800 - 3,000 Roma. Who "swallowed" those 1000 Roma positions in the public administration? Did some of our political factors deliberately sell those places for their better "comfort" or is it something else. But health for that another time in another of my summaries - when the time comes.

We have 484 visitors watching ROMATIMES.NEWS