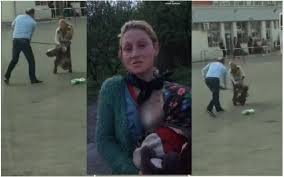 On social networks, a video posted by the post was made on April 25, 2019 in the Romanian city of Zalau, 550 km north of Romania's capital, Bucharest.

The video footage made by one of the bus passengers lasts about 15 seconds is a shocking scene as a public transport driver with a wooden broom handle attacks a woman - a Roma woman who holds a child in her hands.
The tape is seen as the driver flashes across the woman, she strives to protect her waving after him with a plastic bottle and tries to keep the baby in her arms.

At one point, the tape shows how, after a strong blow, the lever breaks but the driver continues to hit the woman. The video shows that none of the participants approached to prevent this attack on the Roma people.

Otherwise, according to eyewitnesses, no one knew the real cause of this violence. This recording was then taken from a local newspaper and was made available to the public.

Otherwise, after this event, there was no information that the case was reported to the police or an emergency call to 112.

Under the new Criminal Code, in cases of violence, police officers can appeal ex officio, rather than appealing by the injured person.

We have 131 visitors watching ROMATIMES.NEWS