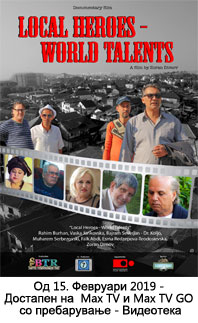 The documentary film product of the SP BTR Production "Local Heroes - World Talents" after successful international festival performances and awards during 2018, immediately at the beginning of 2019, signed a contract with Macedonian Telecom for its retransmission within their offer of Max TV - Videoteka, where there are other film achievements on a world scale.

After the concluded agreement for the realization of this, from the middle of February 2019, that option was launched.

Immediately at the end of February 2019, Makedonski Telekom received information on the number of rentals and the rating of "Local Heroes". The fact was that even at the start, the interest of viewers for renting and watching this documentary film at the SP BTR Production was aroused.

That number is immediately doubled in the next month - March 2019, while in the April report it is evident that "Local Heroes" keep up the top alongside the other worldly cinematic achievements, which indirectly indicates that the audience has a huge interest in watching him .

It is a kind of satisfaction that it is an interesting documentary film that also does not cease to be of great interest to the film audience.

With this conclusion, they agree with Makedonski Telekom, which, according to them, are very pleasantly surprised by the fact that "Local Heroes" aroused great interest among their television audience and clients.