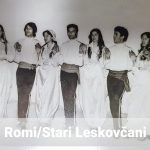 This cultural artistic association was unofficially established in the 50's of the last century, and functioned as a group of citizens until 1973 when they were officially registered. This association had over 100 members and operated in a number of cultural and artistic sections. They performed throughout the former Yugoslavia and Europe, and won numerous domestic and international accolades at various competitions between the Cultural Art Societies.

Unfortunately, this KUD has not been in operation for more than a decade, because there are no interested young people who will continue the tradition of the rich tradition of Leskovac Roma.

In conversation with former members of this KUD, they nostalgically recall their performances and successes.

They expressed hope that however this KUD would come to life within the Roma Cultural Center in Leskovac.

This was also confirmed by the director of the Roma Cultural Center in Leskovac, Srecko Zivkovic, and the spokesman for Leskovac Mayor Aleksandar Stojanovic.

It was also mentioned that the Roma need to preserve their cultural identity, and that they can do so by reactivating the KUD “Shefket Ibraimovic” from Leskovac

We have 165 visitors watching ROMATIMES.NEWS