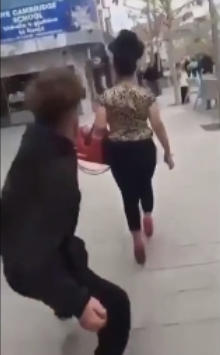 Pristina media published a video footage showing an attack on a Roma woman in the middle of a street in Urosevac.

While an unknown person with a cell phone shoots while a woman moves down the street, the man suddenly flies in behind the back and hits her with pockets in the head and knocks on the floor. As if a beastly attack was not sufficient, the victim, who is still standing on the street, is still kicking him in the head several times.

The state of the attacked woman is not known at this time, nor did any one of the many people on the street manage to help her.

As "Koha" writes, it is not the first time that an attack on the Roma people has occurred, that is, the newspaper reports that a woman was soon attacked after the police arrested the suspect. The investigation continues.

We have 105 visitors watching ROMATIMES.NEWS