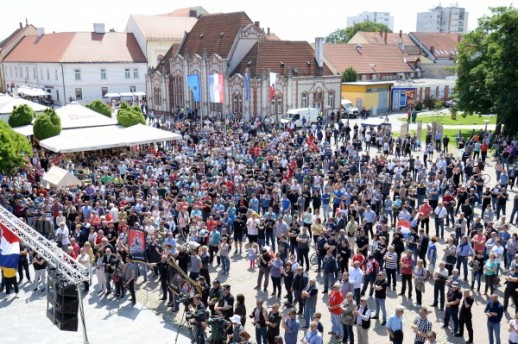 The "I Want a Normal Life" protest in Čakovec on Saturday has already produced the first results.

Interior Minister Davor Božinović said that every local settlement would get their contact cop for month-two.

The first is a step in solving the problems that Međimurce is harassing for 20 years. And all started a 19-year-old. Who stands behind the protest against a part of Roma, who led the peaceful Međimurje on the streets, reveals our reporter Ružica Đukić.

The first move that led to the protest was withdrawn by a 19-year-old Facebook release.

"I am very happy with the response of people because they realized that nobody would come to Međimurje. Everyone initially told Alena and me: "There you will come, security, police, maybe 20-30 people and that will be it." And now we see how many people came, "organizer Tin Hrgovic said.

Asked if he would agree that after the protests was an extreme right, as some claim, he replied that he would not even know who he was referring to.

Aludiraju seems to be on it - because the People's Initiative activist decides - and on another organizer who also denied such allegations from the stage.

"That's ours, Croatia, you shared us with those red and blue, and that's the biggest problem. Politics has created this problem, politics has to solve this problem and solve it, "said Alen Pancer, the organizer of the protest.

The protest was also supported by the City of Čakovec and SDP's Mayor Stjepan Kovac.

"What is particularly rejoicable to me is that the Međimurje are working, self-confident," do not interfere ". I have to say that I am happy with the number of people who came and that is the last five to twelve that something needs to be changed, "said Stjepan Kovac, Mayor of Čakovec.

And change requires that the whole society be included in it.

We have 284 visitors watching ROMATIMES.NEWS