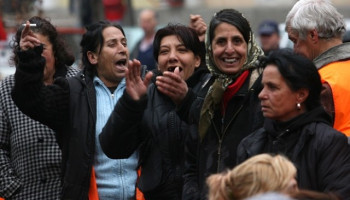 In an effort to protect the outflow of state money for Roma scholarships, Deputy Prime Minister Kuneva, without hesitation, issued one of the most strictly guarded state secrets - how many Roma there are in Bulgaria. Kuneva announced that in 2020 will represent 1/4 of the workforce. But the labor force is 4 million, and therefore the Roma are 1 million. Outside the workforce there are children and adults. If the general ratio between the population (7.5: 4) is applied, it will then turn out that the total number of the Roma ethnic group is 1.87 million people.

This figure in the country has long been visible. Periodically, a scientist comes out and reports some shocking facts, but quickly closes his mouth. For years it has been known for example that among infants of 3 babies, only 1 is a Bulgarian. Entire regions are replaced. For example, the Bulgarian city of Kotel is quite Roma. The same goes for another such - Elena. We are not talking about ghettos in big cities, in which no one knows how many people live.

In his speech today, Kuneva essentially announced the end of Bulgarian statehood. Roma are not imposed or brought people, because they do not have their own state.

We have 77 visitors watching ROMATIMES.NEWS