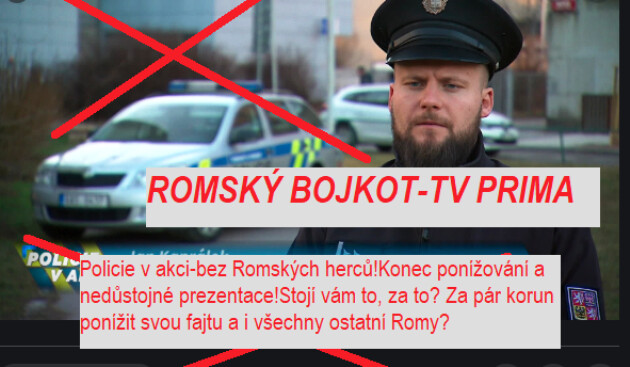 The Czech TV station TV Prima and its program "Police in Action" (Policie v akci) are being discussed on Romani-related Facebook pages in the Czech Republic. Once again, the channel is not exactly getting rave reviews.

"Today, after a long time, I once again saw the Police in Action program on TV Prima - and I was absolutely horrified. I've only seen it twice, but both times, Romani people  have been depicted there as animals stealing mobile phones, mugging a women at knifepoint, etc.," posted the anonymous administrator of the Facebook page called "The Roma of the Czech Republic Vote" (Romové-České republiky-volí).

The Facebook critic is not doubting whether such things actually happen, but is of the opinion that almost all such cases are due to "Romani junkies who are addicted to drugs, which the rest of us Roma are naturally not proud of at all! HOWEVER, there is a 'but' here! What is the purpose of this program? To spark even more animosity among the majority society against us? Are there too few drug addicts, murderers or pedophiles from the majority society for TV Prima to show them? The purpose is clear, it is to constantly confirm to the majority society that we Roma will never improve, that we are just criminals."

We have 204 visitors watching ROMATIMES.NEWS