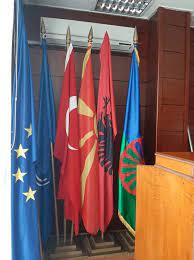 On the occasion of April 8, on the eve of the 50th anniversary of the First World Congress and the start of work of the International Roma Union - IRU, the Network for Permanent and Systemic Solutions for the Integration of the Roma Community in Macedonia composed of 12 Roma NGOs from Macedonia , organizes several days of activities.

The events start on April 7 with a reception and meeting with the Prime Minister of the Republic of Macedonia Mr. Zoran Zaev where the representatives of the Network led by MP Latifa Shikovska and the Coordinator of the Network Zoran Dimov will have a brief meeting where Prime Minister Zaev will be awarded a Plaque for Special Contribution to the Roma Community.

Immediately afterwards in the conference hall of the Government of the RS Macedonia will be held an event entitled "Courage, Dignity, Trust, and Strength in Achieving the Goals of The strategic determinations for the Roma in the Republic of Northern Macedonia ". Most of the Government Ministers were present at that meeting.

On April 8, the representatives of the Network will have a meeting with the President of the Assembly, Mr. Talat Xhaferi, as well as with the President of the country, Stevo Pendarovski. During the reception and the meeting they will be awarded Plaques for Special Contribution to the Roma community. During the commemoration of the events they will also be awarded Plaques and several diplomatic missions in our country such as the embassies of FR Germany, Switzerland, USA, France, Great Britain, Slovakia, the Delegation of the European Union in Skopje, the Embassy of the Kingdom of Norway in Belgrade, MCMS. FOOM. UNDP, UNICEF, to Mr. Samet Skenderi - InSoK, Skopje, Mr. Asan Ferat, Ms. Salija Bekir Halim - Women's Initiative from Suto Orizari as well as posthumously to Mr. Amdi Bajram and Dr. Trajko Petrovski.

We have 96 visitors watching ROMATIMES.NEWS