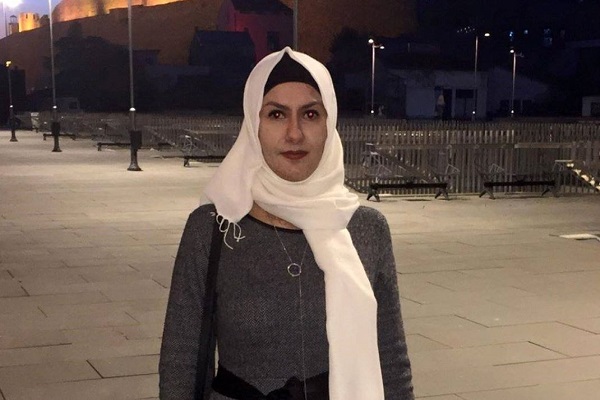 I grew up in a bilingual family, although both of my parents are of Roma origins. My father knows Macedonian and some Roma words, whereas my mother knows both of the languages. Growing up, I didn’t have the opportunity to learn the Roma language, because it was little spoken in my home, up until I got married, where the native language of my husband is the Romani language, and I am now very proud to be able to speak Romani.

My parents enrolled me in a primary school where only the Macedonian language was taught, there were only Macedonian and Roma pupils at that school. We respected each other, we hung out, played games without insulting each other or undermine each other because of our ethnicity. In school we learned to write and read in Macedonian, but, even as a little girl, I joined a course on Arabian language, and that is how I learned how to write and read Arabian.

When I finished primary school, my wish was to go to a theology high school where the Macedonian language could not be studied, only Albanian. When I finished primary school, I wanted to enroll in high school in a theological field where you could not learn in Macedonian, but only in Albanian. But, although I did not know the Albanian language, I did not give up the desire to enroll in that school.

I got accepted, we had the first classes in Albanian, I was not speaking and I was only listening without understanding anything they say. It was very difficult, I felt different. I was bored, and for a moment, I thought of giving up on my wish to study there. But, just as I was going to give up, the mufti appeared and had a class, but while speaking, he noticed a student (me) who doesn’t understand the Albanian language, and in that moment, he began to speak in Macedonian. That gave me a feeling of power and motivation to stay in that school. Immediately after that, I got into an Albanian course and after finishing the course, I knew how to speak and write Albanian, after that, it was easier to study and to reply in Albanian.

Although I was the only Roma girl, the Mufti designated me as the Class President, I was supposed to say the grades of my friends/classmates. The language was not a barrier anymore, and did not stop me from becoming a great student and to finish high school with a 5.00 average. This motivated me even more to prove to myself, and then the others that it is not that scary to be “different from the others”. That anyone can succeed if they’re given a chance and an opportunity to prove themselves. I was also the only Roma woman in the university, which registered to study in Albanian. Nobody knew my nationality, up until I didn’t declared myself and said that I am Romani. After I grew up, I changed my appearance and my outfits, to be more specific, the school encouraged me to respect my religion and I decided to put a headscarf (hijab) as a symbol of Islam. That made me even more “different” from the others. So, on one occasion while we were shopping with my mother in the market in Shutka, my mother and the saleswoman spoke Romani, I spoke Macedonian, but some customers came who did not know Macedonian well, so I translated from Macedonian to Albanian. The saleswoman was confused and asked in astonishment - sorry, what are you? I smiled and told her - we are people, and if you ask about ethnicity we are Roma. He added - but you do not look like Roma?

I left with the question - what do the Roma look like? What makes them so different from others? And what is wrong with being different?

The text is the personal attitude of the author. All rights reserved

We have 422 visitors watching ROMATIMES.NEWS