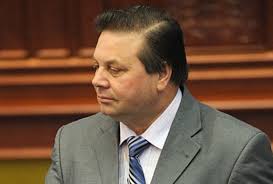 Today, on October 24, 2020, Amdi Bajram, President of the Union of Roma from Macedonia and longtime representative of the Roma in the Macedonian Parliament, died.
He was born on August 30, 1956 in Skopje and graduated from the Commercial High School. Bajram in 1994 became a Member of the Parliament of the Republic of Macedonia as a member of the Party for Complete Emancipation of the Roma (PCER), but worked as an independent MP until the end of his term. In 1996 he founded SRM and was appointed its president. In the period 1998-2002 he supported the VMRO-DPMNE government led by Prime Minister Ljubco Georgievski.
In 2008 he joined a coalition with VMRO-DPMNE led by Prime Minister Nikola Gruevski. Bajram terminated the coalition with VMRO-DPMNE after the party left in opposition after the parliamentary elections in 2016 and joined the coalition with SDSM of Prime Minister Zoran Zaev. In the last parliamentary elections this year, for health reasons, he was not included in the list for the future parliamentary composition.

We have 340 visitors watching ROMATIMES.NEWS