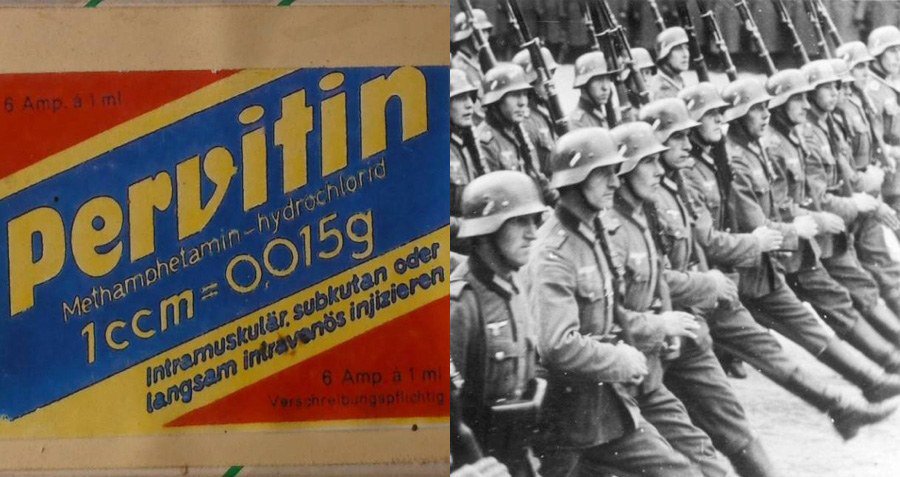 Despite Hitler's anti-drug rhetoric, Nazi Germany used a little courage pill called Pervitin to take Europe by storm. It turns out it was pure methamphetamine.
Just before meeting with Benito Mussolini in the summer of 1943, Adolf Hitler was feeling seriously ill.

Still, he couldn’t ditch an Axis power meeting, and so Hitler’s personal physician injected the Führer with a drug called Eukodal — think oxycodone combined with cocaine — to perk him up.

The physician took a significant risk in doing so. After all, Hitler was prone to latching on to addictive substances and refusing to let go. But in this case, the injection seemed warranted: Hitler was doubled over with violent, spastic constipation, refusing to speak to anyone.

Hitler wasn’t alone in his use of Pervitin. Throughout that time period, everyone from German soldiers at the front lines to menopausal homemakers wolfed down Pervitin like candy.

Widespread drug use wasn’t exactly new in the country. A generation earlier, Germany was mired in large-scale drug use — that is, until Hitler rose to power in part on an anti-drug campaign. But when Hitler changed course and became an addict, the same fate befell many in his country.

By the outset of World War II, German soldiers were using Pervitin to help them storm and conquer much of Europe. The high eventually vanished, however. By the end of the war, when hubris had untethered the Nazis from reality, soldiers used drugs like Pervitin simply to survive.

We have 207 visitors watching ROMATIMES.NEWS