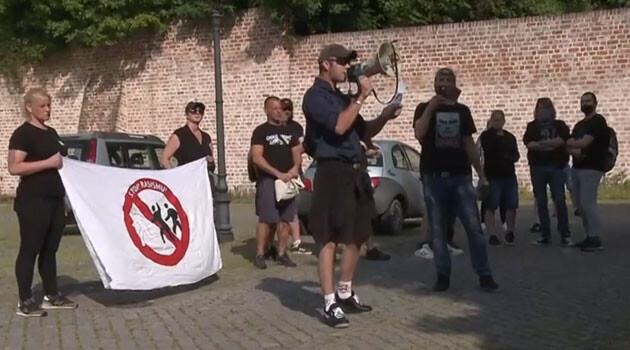 About 150 football hooligans and neo-Nazis marched on Saturday, 5 June through the Czech town of Hradec Králové in an anti-Romani procession convened because of several conflicts that have transpired there in which Romani residents have allegedly been involved. The police have already apprehended three suspected assailants in relation to those events, two of whom have been remanded into custody.

Despite that, the neo-Nazis are threatening to continue their marches if the police do not become more active. The football hooligans and neo-Nazis assembled on Saturday afternoon at the train station in Hradec Králové, from where they set out on their march through the town at about 16:30.

The demonstrators walked from the main train station through the pedestrian zone to the Adalbertinum cultural center, where the conflicts at issue had happened. The extremists were supervised the entire time by dozens of riot police.

During their hate march the extremists chanted slogans such as "Stop Black Racism", "Czechs Come With Us", and "We're The Ones At Home Here". In addition to other racist slogans, they also chanted the names of those victimized by the attack at issue.

We have 212 visitors watching ROMATIMES.NEWS