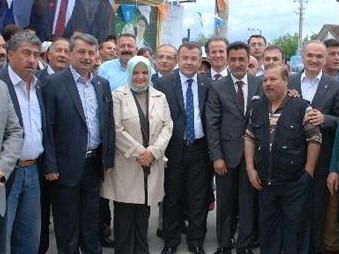 As always open and transparent - The RTS Movement is making efforts to observe all the coincidences and inconsistencies in the political activities in the Republic of Macedonia, including the Roma from Macedonia.
Recently, a group of citizens organized a rally in protest against the country's financial support for a newspaper linked to the terrorist organization Fetullah Gulen (FETO). Otherwise, the Macedonian government approved a cash flow for 11 newspapers in 2018, including Zaman Macedonia, which is directly connected to FETO. The interdrogrogo among the attendees was noted as the sign of the presence of the chairman of the OPER - Nedzhet Mustafa! Knowing the Mustafa background, one question arises: What is Mustafa's goal for giving a wholehearted support for this event. The answer is assumed that it might be:
"So I have always built good relations with the current Turkish government"
Knowing the situation, the DSR can certify with certainty that Nezdet Mustafa never makes a "Do-it-yourself account"!
What is "Mustafa's" interest in such a close relationship with Turkey? The answer is simple: The organization of BAROM - the Balkan Union of Roma whose leader is precisely him, and that very often there is cooperation with that country, which mostly finances all those activities. Through BAARM it also realizes its private business deals, and under the cover of it, it builds that "guaranteed close relationship".
There is not much to comment here or conclusions. And yet, as part of the Roma community and the situation that is currently relevant to the events in Shutka, as most of the Roma political representatives, Nezdet Mustafa did not come out with any announcement or attitude regarding the recent developments.
Such a politician's profile can only act that way. While it benefits and interest will appreciate you endlessly, and when "love ends" does not even know you!
His profile of action is commonly known in 99% of the Roma population in Macedonia. There is a party but there is no default membership, supporters, but it always finds a "hole" to filter out power! By the time this system is lit up, is that not known!

We have 300 visitors watching ROMATIMES.NEWS