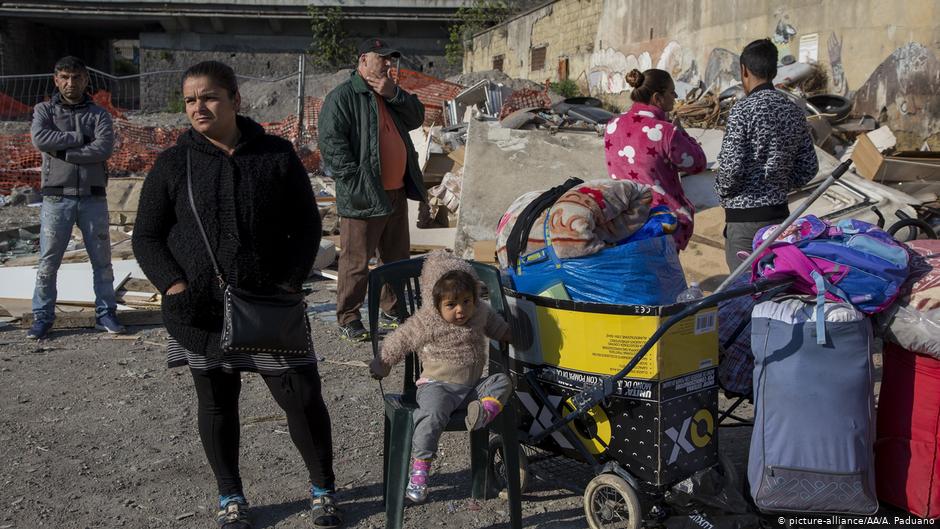 Deutsche Welle reports that Italian Interior Minister Matteo Salvini, an ultra-right populist,
instructed regional authorities this week to produce maps of what he called "illegal settlements" inhabited by Romani people around the country. The data is meant to serve as the basis for conducting his previously-announced "census" of the Roma.

That "census" is then meant to create the background material for the process of deporting all Roma who are not originally from Italy. German MEP Romeo Franz, who is himself of Romani origin, sharply objected to Salvini's current policies yesterday as racist.

"I am calling on the European Parliament to express itself in far stronger terms against antigypsyism and to take action against antigypsyists, including Salvini. His policy is an attack on European values, it is a disgrace for Europe, it is racism," the MEP said. 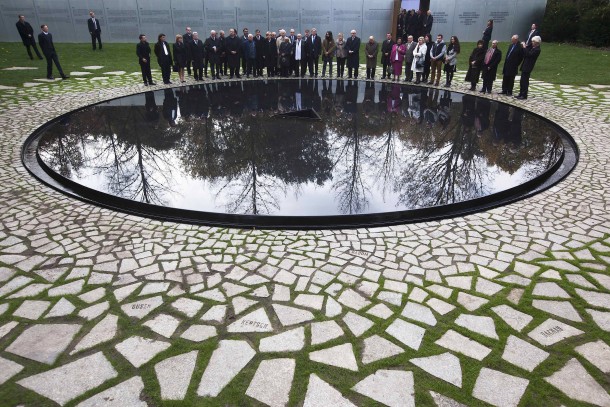 Unknown people in Berlin damaged the Sinti and Roma monument in Europe, killed by national socialism.

A large "A" was carved in a glass panel at the Simsveweg monument in the Grand Tiergarten, a police spokesman said on Sunday. The damage was discovered Tuesday night by police officers. The investigator was in charge of the State Police Criminal Investigation Department responsible for the politically motivated criminal police state security.

The monument in Tiergarten was inaugurated in autumn 2012. The design is Israeli artist Dani Caravan. It consists of a round well surface with a stone that can be pulled out, on which a fresh flower is placed on a daily basis.

The International Holocaust Remembrance Alliance unites governments and experts to strengthen, advance and promote Holocaust education, research and remembrance and to uphold the commitments to the 29th January 2000 Stockholm Declaration.

The IHRA (formerly the Task Force for International Cooperation on Holocaust Education, Remembrance and Research, or ITF) was initiated in 1998 by former Swedish Prime Minister Göran Persson. Today the IHRA’s membership consists of 33 member countries, each of whom recognizes that international political coordination is imperative to strengthen the moral commitment of societies and to combat growing Holocaust denial and antisemitism.

The IHRA’s network of trusted experts share their knowledge on early warning signs of present-day genocide and education on the Holocaust. This knowledge supports policymakers and educational multipliers in their efforts to develop effective curricula, and it informs government officials and NGOs active in global initiatives for genocide prevention.

Finland was elected a full member of the Intergovernmental IHRA in 2010. 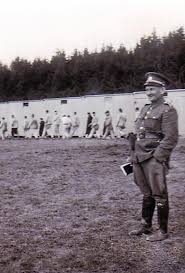 At the time of the announcement of the first measures against the Roma and Sinti in Nazi Germany, anti-Gypsies, like anti-Semitism, existed for a long time in the Third Reich and in many other European countries.
In various matters of the genocide of the Roma, after the narration of the Holocaust, the authors often begin only from this term, to explain the motivation of the most recent, most frightening act accomplished by the Nazis.

The key to Roma was exactly the same in 1936, when the Institute for the Study of Pure Rational Nation was established. In July 1936, on the eve of the Olympic Games, the hunt for Roma in Berlin began. About 600 of them were thrown out of their houses and expelled on the periphery, and then collected in a camp in Markan.
At the same time, about 500 Roma from Bavaria were sent to Dachau for retraining and "possible sterilization".

From the research, Dr. Ritter and his assistant Eva Justin, conducted at the Markan camp and other places for the Roma, Himmler announced the key decree - the racist concept of future policy towards Roma - with the most important conclusions. Thus, on December 8, 1938, he issued a circular letter on the fight against the "Gypsy Dangers". "Mishing" or "dirty" Roma, who, according to Ritter, were over 90 percent of the overall Romani population in Germany, were in the spotlight. By registering all Roma, the Germans are forbidden to marry them, and a special law on the Roma is proposed, which will regulate their position in the German environment. For the first time, the expression "a final solution to the Gypsy question" appeared.

We have 126 visitors watching ROMATIMES.NEWS